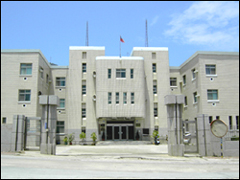 Located in a desolate and remote area which is isolated from the centre of Taiwan, our County for long did not set up a judicial system. In 1949, after losing mainland China, the Republican Government withdrew to Taiwan and our islands of Matsu. Our County, composed of a chain of islands in the Strait of Taiwan, thus became an important military base for Taiwan’s defense. In 1956, all political affairs that our island controlled needed in turn to be controlled by the Command Unit of Matsu Garrison; and judicial affairs became controlled by military tribunal agencies. In July 1956, our County set up an executive committee, but did not set up agencies for judiciary or military law. Cases of civil affairs were handed over to Military Law Section, Command Unit, Matsu Garrison. In order to make a quick examination and conclusion within a limited period to secure people’s rights and interests and to stabilize society, a Military Law Office was set up in the County Government. In other words, a method of combining military law and the judiciary was used to handle civil affairs and criminal cases in our county. Matsu area initially did not have any judicial agency set up. In 1969, Kinmen District Prosecutor’s Office, Fichien Province, set up Lienchiang Civil Affairs Court in Matsu to specialize in dealing with cases of civil affairs and lawsuit procedures. Criminal cases were examined and investigated by the Military Law Office of Lienchiang County Government. In order to coordinate with removal of martial law cases from Taiwan and Penghu, Lienchiang Prosecutor’s Office (under the jurisdiction of Kinmen District Prosecutor’s Office, Fuchien) was set up on 10th October, 1987, at the approval of Executive Yuan. The Office was temporarily located on the second floor of Kinmen District Prosecutor’s Office and focused on examination and investigation of criminal cases and other executive affairs. The Office’s jurisdiction area includes four townships: Nangang, Beigan, Jyuguang and Dongyin. Judicial Yuan and Ministry of Justice examined the situation and appropriated funds. And ordnance authorities helped build a joint-judicial office building. It took three years to complete the construction. In 1991, the Office was moved into the Judicial Office Building. In order to strengthen development of rules of law of the battle field, secure people’s rights and interests and build up a complete judicial system, the Minister of Justice specially provided the first preparatory sum to the Office and its sub-departments in 2003. On 31st December, 2003, Lienchiang District Prosecutor’s Office, Fuchien, was officially established.